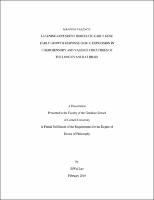 Much of our knowledge about the neural mechanisms of valence processing stems from classical fear or reward paradigms. Iconic images of fear and reward learning include rats learning to associate a tone with footshock or pressing a protruding lever to retrieve sugar rewards. Due to the robustness and repeatability of these paradigms, they became the wellaccepted 'standard' and gained popularity throughout the history of learning and memory research. These standardized protocols have contributed immensely to our understanding of the molecular, cellular, and systems mechanisms of learning and memory. However, we are merely beginning to unravel the neural networks involved in fear and reward learning, and it is crucial to question how these two forms of learning differ. Will it be possible to compare these two forms of learning given the substantial modality and procedural differences which exist between the classical shock and reward paradigms? For my dissertation, we have generated a behavioral and physiological paradigm to dissect aversive and appetitive learning using maximally similar experimental procedures. We chronically implanted adult Long Evans rats with customdesigned intraoral cannulae, and trained them to associate an odor with either an infusion of sweet (rewarding) or bitter (aversive) tastant (saccharin or quinine respectively). Rats demonstrated the ability to express appetitive or aversive conditioned responses (e.g. rapid mouth movement, flailing, and longer odor investigation) following odor presentation, indicating that they associated the odor CS with the hedonically positive or negative tastant. Rat demonstrated broader generalization following aversive conditioning, but not following appetitive, backward-paired, or odor controls. I then measured olfactory perceptual processing changes following reward or aversive learning, and olfactory and valence circuitries by mapping immediate-early gene Egr-1 expression. Significant differences in response to the aversively conditioned odorant were observed in specific subregions of the anterior olfactory nucleus and anterior piriform cortex. The differential patterns of immunoreactivity were dependent on the rostrocaudal sampling location of each region, and there were statistically significant interactions between the large number of chemosensory and valence brain regions quantified and treatment groups.