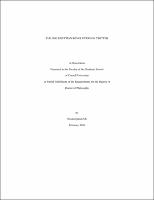 This dissertation examines Twitter communication from the 2011 Egyptian revolution to assess emotional, cognitive, and relational processes involved in mass mobilization against the state in order to understand the collective experience of revolutionary events, organization in communicative action, and the effects of the revolutionary process on actors. The work examines: (1) changes in emotional and cognitive states with interacting elements in revolutionary consciousness that motivated and sustained opposition; (2) coordinated information dissemination on social media that generated emergent organization in spatialinformation networks about Egyptian protests; (3) affective solidarity formed from the diffusion of revolutionary humor that influenced subsequent participation in subversive communication; and (4) cognitive changes among participants and observers of revolution through the spread of messages that reflected imagined collective futures.