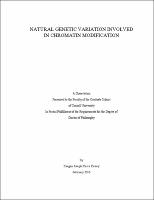 Gene expression is strongly influenced by local chromatin state, begging the question of what role population genetic factors play in driving variability in chromatin state. Using a combination of traditional D. melanogaster crosses, fully sequenced genomes, and computational methods, we survey global autosomal variation that impacts position effect variegation (PEV), a traditional proxy for chromatin state. We find little evidence for involvement of segregating functional (non-synonymous) variants within >100 known autosomal modifiers of PEV. Instead, we find enrichment of small-effect variants located within regions of open chromatin, sites of origin recognition complex (ORC) binding, and highly occupied target (HOT) regions for transcription factors. These variants fail to fully explain observed phenotypic variance in PEV, with the remainder accounted for by variants with ever smaller effect sizes. Further, we note only a small proportion of variants are explained through geneenvironment interaction, and we find no evidence for transgenerational transmission of chromatin state. Next we constructed a set of Y-chromosome replacement lines to probe the means by which altered heterochromatin content can impact chromatin states elsewhere in the genome. We reveal surprisingly high levels of heterogeneity among Y chromosomes from inferred counts of repetitive kmers and transposable elements. These variants show signs of functional constraint along with association to PEV and exceptionally strong associations to transcript counts from RNA-seq. Rapid evolution of Y-linked kmers and their impact on global gene expression is apparent from the degree of inter-population heterogeneity, including population-specific repeats. In summary, we identify involvement of a historically overlooked source of variation with functional consequences to gene expression. This work has immediate impact to informing current medical GWAS practice, and has further implications for refining evolutionary models of gene regulation.