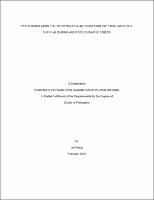 Protein folding in the endoplasmic reticulum (ER) has emerged recently as a source of reactive oxygen species (ROS). As ER homeostasis is susceptible to disruption as a consequence of changes in redox environment, gaining a fundamental understanding of how the ER manages ROS production to maintain protein homeostasis is crucial, especially providing that disruption of ER function and increased ER stress are tightly associated with neurodegenerative disease, diabetes and cancer. My research aims to understand how the ER senses and responds to oxidative stress, and I have characterized a novel redox-signaling pathway that maintains ER homeostasis and protects the ER from accumulation of ROS. The signaling pathway I have focused on is centered on an Hsp70 molecular chaperone, BiP, which consists of an ATPase domain and a peptide-binding domain. Cooperation between both domains of BiP facilitates protein folding, prevents protein aggregation, and regulates ER stress. When I began in the lab, preliminary data suggested the single cysteine in the yeast BiP is essential for cell survival and the lab's working model was that post-translational modification of BiP's cysteine alters BiP's activity to allow for cell survival during stress. My PhD thesis research started with asking three questions: (1) is the BiP cysteine oxidized / what are the modifications on BiP's cysteine, (2) how do these modifications affect BiP's function, and (3) how do these modifications facilitate cell survival during and post oxidative stress. By using a biotin switch assay, which enables detection of cysteine oxidative modifications, I demonstrated that during oxidative stress, BiP's cysteine is modified by both peroxide and glutathione in the ER, forming a sulfenic acid (-SOH) moiety and a glutathione adduct (-SSG) correspondingly. Both modifications inactivate ATPase activity and enhance peptide-binding activity of BiP, turning BiP from an ATPase dependent foldase into an ATPindependent holdase. I observed that oxidation of the BiP cysteine enhances cell survival upon oxidative stress, likely through its enhanced holdase activity. The increased peptide-binding activity of oxidized BiP may facilitate cell survival by preventing protein aggregation within the ER and also may serve to suppress protein load by inhibiting protein import into the ER. I propose the two different redox modifications of BiP may stem from unique properties for the two adducts. Sulfenic acid is prone to further irreversible oxidation by peroxide. I suggest a glutathione adduct can prevent BiP's cysteine from irreversible oxidation by peroxide.