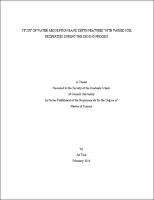 Selected spectral reflectance features of soils are examined with respect to their relationship to soil water content. Three soil samples  selected to represent a range of particle size distribution, texture, and drying characteristics   were monitored as the samples progressed from fully saturated to air dry. Spectral reflectance was collected over the wavelength range 350 nm to 2500 nm, a range in which four major water absorption bands exist: two in the visible/nearinfrared (VNIR) region centered at 970 nm and 1160 nm, and the other two in the shortwave infrared (SWIR) region centered at 1440 nm and 1930 nm. The water absorption bands were the focus of this work with the expectation that these features would be the most sensitive indicators of the surface water content. However, the two absorption features in VNIR region were not useful for all three soils, so the two absorption bands in SWIR region became the focus in this study, especially the more sensitive 1930 nm band. Plots of the changing absorption band depths in the SWIR region were similar in shape among three soil samples. Three to four approximately linear stages were observed over the whole drying process, however, the transitions between drying stages did not occur at consistent points in the drying process, making it difficult to build a direct relationship between the absorption features and volumetric water content that would be independent of the soil type. Although no general, soil-independent relationship could be found between an absorption feature and volumetric water content, there were characteristic changes in the band depth features that were coincident with evaporation stage transitions. Initially, the depth of the band centered at 1930 nm increased steadily and slowly with decreasing soil water content, reached a maximum, and then abruptly decreased marking a distinct change between the early and late, relatively steady drying rate stages. During the late stage, the magnitude of the band depth decreased sharply with only a small change in water content. The decrease was coincident with the water evaporation transition from stage-1 (constant, relatively fast evaporation rate) to stage2 (slower evaporation rate), a transition which is related to the exhaustion of pore water and the initial loss of adsorbed water. The two SWIR water absorption band depths did not decrease with decreasing soil water content monotonically, which is counterintuitive. In order to understand the process, a simple mathematical model was built which suggested that the pattern of change in the band depth was related to the near extinction of light at the band center relative to the band shoulders. This extinction can be related to a specific water optical path length. The maximum absorption band depth at 1930 nm (and the associated water optical path length) appears to coincide with a trace amount of water present in the pore spaces for all three soil samples, which is consistent with the transition in drying rates.