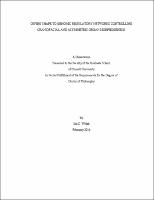 Morphogenesis is the most critical and dynamic utilization of genomic information in the life history of an organism and a powerful system for advancing our understanding of genomic regulation and function. Stereotyped morphogenic processes provide an invaluable system for directly visualizing the functional activity of the genome via our ability to position its operational components relationally in space and time through the techniques of experimental embryology, molecular biology, and transcriptome analysis. Developmental genomics seeks to establish in vivo models to provide a cellular context where the causal relationships between the expression of key morphoregulatory genes, their transcriptional targets, and the morphogenic cellular behaviors that they control are easily determined, quantifiable, and amenable to experimental manipulation. In pursuit of this challenge, I have developed and characterized gene regulatory network models focused on two critical morphogenic processes, craniofacial development and asymmetric organ morphogenesis. Formation of the vertebrate face requires the coordinated outgrowth and fusion of multiple paired prominences. How morphogenetic domains are integrated to coordinate craniofacial development is an important question, and while a number of genes and pathways important for palate development have been identified, an understanding of how these signals are organized and integrated to achieve precise control of craniofacial development has been lacking. My analysis identifies a previously unrecognized growth zone responsible for periodic signaling center formation and the modular organization of developmentally important signaling genes and transcription factors (e.g. Shh, Bmp4, Msx1, and Barx1) in the developing palate. This newly identified growth zone provides a distributed system of common instructional cues that maintain growth of the secondary palate in proper registration with the surrounding elements of the upper jaw. Patterning of the embryonic left-right axis is essential to directing the asymmetric growth and morphology of individual organs. Overall body situs and asymmetry of organ morphology is critical to normal function and regulated by the homeobox transcription factor Pitx2. Importantly however, the gene targets and cellular behaviors controlled by Pitx2 to manifest asymmetry remain obscure. Using transcriptomics of the simple binary left-right organization of the dorsal mesentery (DM), I have elaborated and functionally characterized Pitx2 dependent asymmetric cellular processes acting on very different scales of biological organization. At the tissue level I show that regulation of asymmetric intercellular signaling is a conserved mechanism through with Pitx2 manifests differential cellular behavior to achieve asymmetric organ growth. At the chromatin level, I have leveraged the novel finding that genes physically linked to Pitx2 exhibit complementary right-specific expression relative to left-sided Pitx2 in order to characterized the relationship between 3D chromatin folding and asymmetric gene expression from the Pitx2 locus itself.