Resource Governance As Depoliticized Development: The Rise Of Fisheries Co-Management In Vietnam 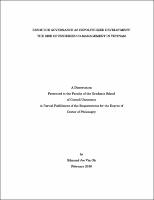 The rise of new, hybrid modes of environmental governance involving multiple actors is commonly attributed to a changing role of the state, in which it no longer assumes sole responsibility as custodian of the nation's environment and natural resources. This dissertation addresses the question of whether the reverse may also be valid, namely whether the rise of these new forms of environmental governance may in fact be spurring a rethinking of the role of the state, and a consequent change in the relationship between society and the state. To do so I examine the emergence of co-management-a form of governance where management responsibility and authority is shared between the state and a community of resource users-in Vietnam's fisheries, and ask if and how it may be changing the nature of the Vietnamese state. In-depth interviews, documentary analysis, and participant observation of events at several comanagement pilot projects in the Mekong River Delta reveal a dominant discourse that portrays co-management initiatives as mere development interventions, and which lacks serious consideration of both their political ramifications and the historical context in which they occur. By examining the lineage of this discourse, the various societal relations that comanagement will invariably impact, as well as the power relations between co-management actors operating at different scales, I argue that comanagement represents a much farther-reaching transformation of statesociety relations than is commonly perceived. I further contend that the rise of co-management epitomizes Vietnam's peculiar approach to policy innovation, where local-level experimentation tests the limits of that which is officially sanctioned under law, but is eventually co-opted into policy if it can be shown to work. The uncertainty engendered by the lack of clear policy guidance amidst the imperative to innovate represents a 'creative tension' that a few policy entrepreneurs have begun to successfully exploit. I conclude that the rise of co-management augurs a shift in power, accountability, and legitimacy that will see the Vietnamese state playing an ever greater yet more meaningful role in the lives of its citizens.