Discovering Gold In The Greater Antilles – The Natural History And Breeding Biology Of The Hispaniolan Golden Swallow, Followed By The Status Of The Critically Endangered Jamaican Golden Swallow 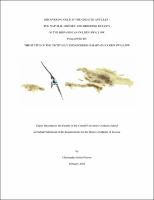 This thesis is divided into two parts that collectively tell the contemporary stories of both Golden Swallow subspecies known to the Greater Antilles islands of Hispaniola and Jamaica. Part I constitutes the first in-depth look at the natural history and breeding biology of the Hispaniolan Golden Swallow derived from a three year study of a breeding population in the high-altitude pine forests of the Dominican Republic's Cordillera Central. The results and their respective discussions are extensive, and have therefore been organized in a more or less chronological format that adheres to particular stages of the breeding season. Some themes that have yet to be fully explored have also been included in order to highlight important gaps in our knowledge of the species. The idea behind this is simple - to inform the scientific community and public of what we know and what we still do not, the latter being just as important as the former, since this project was always designed to act as both a catalyst and a transparent, educational framework for future avian investigation in the Dominican Republic. Part II of the thesis declares the Jamaican subspecies of Golden Swallow extinct. This work concludes the long-term search (following Graves 2014) for the swallow, and should be received by conservationists and ornithologists in the Dominican Republic as a warning of how quickly an endemic species can be lost forever. Moreover, the extinction should be treated as motivation for improving local stewardship and scientific knowledge surrounding Hispaniola's avian species. iii