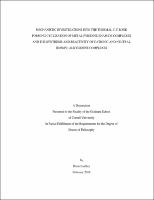 A series of first row transition metal pyridine-enamide complexes has been synthesized. In the course of reactivity studies, it was discovered that heating a solution of the cobalt bis(pyridine-enamide) pyridine adduct resulted in intraligand CC coupling to form an indolamide ligand. Control experiments with the corresponding lithium pyridine-enamide afforded the same indolamide. In order to probe the mechanism of cyclization, deuterium labeling experiments for the lithium pyridineenamide compound were conducted. Careful kinetics measurements supported a mechanism consisting of reversible hydrogen transfer followed by rate-determining CC bond formation, in accord with computational results. Iron(II) complexes bearing cyclometalated benzyldialkylphosphine ligands were synthesized via a salt metathesis approach by treating FeCl2(PMe3)2 with two equivalents of (2-lithiobenzyl)diphenyl- and (2-lithiobenzyl)dicyclohexylphosphine reagents. For the phenyl derivative, a 6-coordinate diamagnetic complex containing two chelating phosphine ligands and two trimethylphosphine ligands was obtained. Contrarily, for the cyclohexyl derivative, a 5-coordinate complex containing two chelating phosphines and one molecule of trimethylphosphine was obtained. This compound is paramagnetic with an S = 1 ground state. Efforts to synthesize Fe(IV) alkylidenes by treating these Fe(II) complexes with diphenyldiazomethane were ultimately unsuccessful. An iron(II) vinyl complex was synthesized by reaction of cis-Me2Fe(PMe3)4 with a 2-propynylaniline benzylidene ligand. Protonation of this complex with [H(OEt2)2]BArF4 (BArF4 = B(3,5-(CF3)2C6H3)4) gave access to a cationic Fe(IV) alkylidene complex. By treating this complex with different anionic nucleophiles, a rare series of neutral Fe(IV) alkylidene complexes was obtained. In addition, treatment of the cationic alkylidene complex with MeMgCl afforded a novel Fe(IV) methyl complex. Attempts at catalyzing olefin metathesis with both the cationic and neutral alkylidene complexes proved unsuccessful, likely due to recalcitrant phosphine dissociation and the sterics at the alkylidene carbon.