There'S A New Left In Town: The Politics Of Solidarity In Occupied Jerusalem 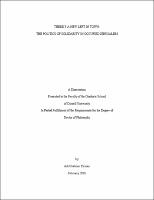 In November 2009 a small group of Jewish Israelis initiated a protest in Sheikh Jarrah, a Palestinian neighborhood in East Jerusalem, in response to the forced eviction of more than sixty Palestinians from their houses and the establishment of a Jewish settlement in the neighborhood. The group grew rapidly and for almost three years thousands of people protested in Sheikh Jarrah against Israel's occupation in the Palestinian Territories. In the media this struggle was portrayed as the birth of a new Israeli Left, as a true collaboration between Israelis and Palestinians. However, in September 2012 Jewish Israeli activists decided to end the struggle and a few months later their political movement, Sheikh Jarrah Solidarity, ceased to exist. This study is an ethnographic exploration of particular dynamics related to the Sheikh Jarrah struggle and its collapse. Through a critical analysis of this case study I develop a theoretical framework for the analysis of political protest in general. I argue that in order to provide a nuanced analysis of political dissent one has to account for the dialectical relationships among sociocultural structures, people's subjectivities, and their agency. Instead of developing a structural cause-and-effect analysis, as different studies of social movements aim to do, my objective is illuminate a system of interactions in which subjectivities, forms of agency, and socio-cultural structures are co-produced. Drawing from practice theory, psychoanalysis, and postcolonial theory, and based on rich ethnographic data, this work reveals the ways in which particular forms of political agency and subjectivity both challenge and reinforce the socio-cultural structures they aim to change. Focusing on the conscious and unconscious meaning of political practices in the circles of the Israeli Left, I argue that many social justice struggles, and especially joint struggles between privileged and oppressed, strengthen and unsettle power structures simultaneously. A close analysis of these struggles which accounts for the dialectical relationships among agency, subjectivity, and sociocultural structures reveals the desires, interests, and perceptions behind particular forms of protest and allows a better understanding of their contradicting effects.