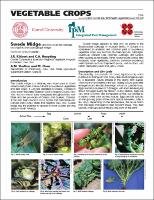 The swede midge is a relatively new insect pest in North America and poses a serious threat to cruciferous vegetables and field crops. It was first identified in Ontario, Canada in 2000 and in the United States in 2004 in Niagara County, New York. It is now known to be widespread throughout New York State and the provinces of Ontario and Quebec, Canada. It has also been found in Nova Scotia and Saskatchewan, Canada and in a few states that neighbor New York. Swede midge has the potential to spread to most crucifer growing areas of North America.