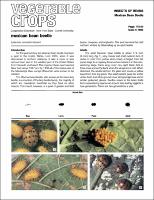 For the past century the Mexican bean beetle has been a pest in the United States. Until 1920, when it was discovered in northern Alabama, it was a more or less serious bean pest in the western part of the United States from Colorado southward. This important bean pest reached New York about 1927 and by 1938 all of the states east of the Mississippi River except Wisconsin were known to be infested.