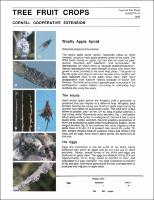 The woolly apple aphid (WAA), reportedly native to North America, occurs in most apple-growing areas of the world. The WAA feeds mainly on apple, but can also be found on pear, quince, mountain ash, hawthorn, and cotoneaster. Its reproduction on these hosts is asexual (parthenogenetic). Sexual reproduction has been thought to occur only when elm grows in close proximity to the other host plants. The portion of the life cycle occurring on elm has become more doubtful and less important than in the past, since most elms have disappeared from Eastern forests because of Dutch Elm Disease. The WAA tends to be a sporadic pest in orchards in the northeastern United States, occurring in noticeably high numbers only every few years.