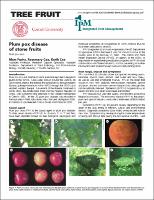 Plum pox is a viral disease of stone fruits first reported in Bulgarian plums in the 1910’s. More widely known around the world by its Slavic name, sharka, the disease first spread slowly through eastern Europe, gaining momentum in the 1950’s through the 1970’s as it reached western Europe. Movement of the disease continued in North Africa, the middle East, India and the People’s Republic of China, with symptoms first detected in the western hemisphere in Chile in 1992. In the US, plum pox disease was recorded in Pennsylvania in 1999, followed by New York and Michigan in 2006. In Canada, it was detected in Nova Scotia and Ontario in 2000.