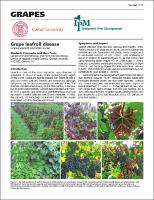 Leafroll is one of the most important virus diseases of grapevine. It occurs in every major grape-growing region of the world. Grapevine leafroll disease can affect all native and Vitis vinifera cultivars, hybrids, and rootstocks, although symptoms are not always expressed on infected vines. The disease was described as early as the 19th century in Europe, but its graft-transmissibility was not demonstrated until 1937. In 1979, a specific type of flexuous and filamentous virus was reported in a leafroll-affected vine. Shortly thereafter, in 1983, the capacity of mealybugs to transmit one of the viruses associated with this disease was shown.