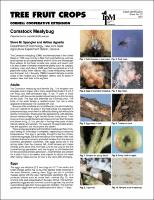 The Comstock mealybug (CMB) was first reported in the United States in 1918 concurrently in New York and California, and has since spread to all coastal states and the Ohio and Mississippi River valleys. Its fruit hosts include pear, apple, and peach, and it is also a pest of several ornamental plants such as catalpa, mulberry, pine, and others. CMB was first recognized as a fruit pest in the 1930s. From 1950 to 1980, it was infrequently noticed as a fruit pest, but in the early 1980s it caused damage to apple crops in the Hudson and Champlain valleys, and to pears in western New York later in the eighties.