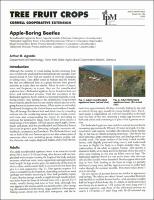 Although the number of wood-boring beetles attacking fruit trees is relatively small and their infestations are sporadic, four species found in New York are capable of seriously damaging or killing trees. They differ some in biology and life history, but they are addressed here as a group because their general activities as a pest class are similar. Taken in order of importance and frequency as a pest, they are the roundheaded appletree borer, flatheaded appletree borer, broad necked root borer, and tilehorned prionus. With the exception of the flattheaded appletree borer, which is a buprestid (metallic woodboring beetle), they belong to the cerambycid (long-horned beetle) family, and the last two are closely related species in the group known as prionus root borers. All are native to and widely distributed throughout the United States and southern Canada. They all damage deciduous fruit and shade trees by tunneling as larvae in to the conducting tissue of the lower trunk, crown, and roots and compounding the injury by providing an entryway for destructive fungi. Each of these pests attacks a broad range of host plants. All four species attack apple, cherry, peach, and plum, and the roundheaded and flatheaded borers also occur in quince, pear, flowering crabapple, mountain ash, shadbush, cotoneaster, and hawthorn. The flatheaded borer and one or both of the two Prionus species are also serious pests of numerous other trees, including pecan, hickory, poplar, willow, chestnut, oak, maple, dogwood, linden, and several shrubs.