Data from: How Honey Bee Colonies Survive in the Wild: Testing the Importance of Small Nests and Frequent Swarming 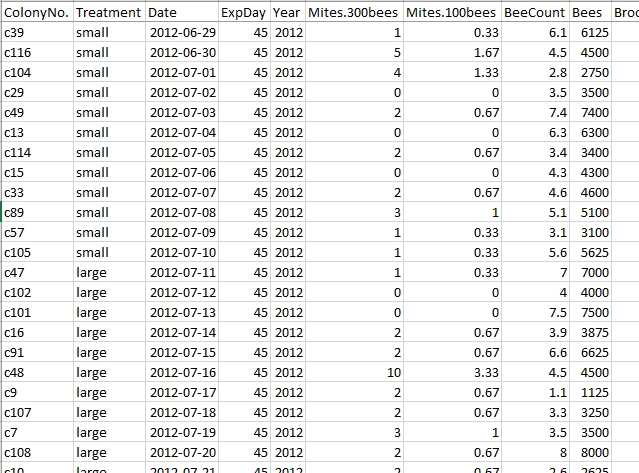 The ectoparasitic mite, Varroa destructor, and the viruses that it transmits, kill the colonies of European honey bees (Apis mellifera) kept by beekeepers unless the bees are treated with miticides. Nevertheless, there exist populations of wild colonies of European honey bees that are persisting without being treated with miticides. We hypothesized that the persistence of these wild colonies is due in part to their habits of nesting in small cavities and swarming frequently. We tested this hypothesis by establishing two groups of colonies living either in small hives (42 L) without swarm- control treatments or in large hives (up to 168 L) with swarm-control treatments. We followed the colonies for two years and compared the two groups with respect to swarming frequency, Varroa infesttion rate, disease incidence, and colony survival. Colonies in small hives swarmed more often, had lower Varroa infestation rates, had less disease, and had higher survival compared to colonies in large hives. These results indicate that the smaller nest cavities and more frequent swarming of wild colonies contribute to their persistence without mite treatments. This item is the dataset underlying this project.