Chinese Hemlock in the Urban Landscape—An Alternative to Eastern Hemlock 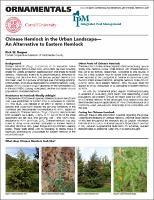 Eastern hemlock (Tsuga canadensis) is an important native forest species that provides many ecosystem services including shelter for wildlife, protection against erosion and shade for forest streams. Additionally, thanks to its shade tolerance, threshold for shearing and attractive form and texture, eastern hemlock has also been used as a popular landscape tree and hedge planting. Unfortunately, an invasive insect pest known as the hemlock woolly adelgid (HWA) (Adelges tsugae) appeared in the northeastern US in the mid-1980s causing widespread decline and death of local populations of eastern hemlock.