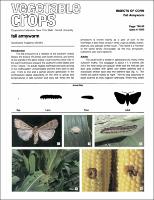 The fall armyworm is a resident of the southern United States, the tropics of Central, and South America, and some of the islands of the West Indies. It survives the winter only in the warm Gulf Coast areas of the southern United States and in the Tropics. The adults migrate northward annually arriving in the northeastern United States anytime from early to late July. There is one and a partial second generation in the northeastern states depending on the time of arrival and temperatures in late summer and early fall. While the fall armyworm is known mainly as a pest of corn in the Northeast, it also feeds on such other crops as alfalfa, cotton, peanuts, and grasses farther south. This insect is a member of the same family (Noctuidae) as the true armyworm, cutworms, and corn earworm.