Sustainable Agriculture Student Films (PLSCS1900)
JavaScript is disabled for your browser. Some features of this site may not work without it. 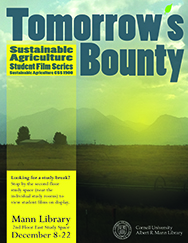 In the fall semester, students in Professor Matt Ryan’s PLSCS 1900 class "Sustainable Agriculture" are asked to create a short film conveying a particular aspect of sustainable agriculture. Food and Agriculture Librarian Ashley Shea works with the class to teach traditional research search strategies, videography skills (including storyboard planning, film capture techniques and the use of editing software), and basic copyright rules and fair use considerations.

More than fifty films are submitted annually by students and judged by their classmates on creativity, quality of videography and clarity of message. Students present their films to the class during a “film festival” held in Mann Library’s conference rooms while staff from Mann serve popcorn.

All students that consent to sharing their film deposit it here for the benefit of the Cornell community. The top 15 films that were selected by the instructors and their peers are noted below, in addition to being displayed at a special exhibit on the first floor of Mann Library during the two-week December exam period.