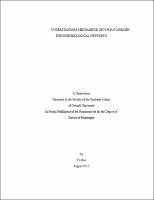 In the past few decades, great progress has been made in uncovering the molecular bases of many human diseases. As we begin to appreciate the complex cellular architecture, the "one-gene/one-enzyme/one-function" concept is no longer apt to explain the complex genotype-phenotype relationships. In fact, the cell functions as an intricate network of interacting genes, gene products and metabolites. Perturbations in biological networks may underlie many disease phenotypes. My dissertation examines the mechanisms of human diseases and disease mutations in the context of biological networks. First, I investigated the regulatory effects of transcription factors (TFs) and microRNAs (miRNAs) on target gene expression, protein-protein interaction and disease association in an integrated gene regulation network. My results suggest that TFs and miRNAs occupy distinct niches in the overall regulatory network within the cell. While TFs tend to regulate intra-module clusters, miRNAs tend to regulate intermodule clusters. Next, to better understand different molecular mechanisms through which mutations lead to diseases, I examined the effects of disease-associated mutations with different inheritance modes and molecular types in a three-dimensional protein interactome network. I found that although recessive mutations on the interaction interface of two interacting proteins tend to cause the same disease, this widelyaccepted "guilt-by-association" principle does not apply to dominant mutations. Furthermore, my analyses suggest that a significant fraction of truncating mutations, which are often considered as "loss-of-function" mutations, can generate functional protein products. Then, I investigated the molecular phenotypes of human disease mutations that are native in the orthologous proteins of other species. As these mutations are potentially compensated in the other species through epistatic selection, they are named potentially epistatic mutations (PEMs). Here, we experimentally demonstrated that PEMs are less deleterious than regular disease mutations, and identified potential intra- and inter-protein compensatory mutations for the PEMs. Finally, I set up a variant prioritizing pipeline that incorporates various biological data such as known disease genes, biological pathways, protein-protein interactions and protein structures to identify predisposing mutations from the wholegenome and whole-exome sequences of Crohn disease and multiple myeloma patients. This analysis pipeline led to the identification of a novel, high-risk variant in Crohn disease.