The Contemporary Body Of Mexican Masculinities 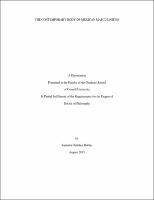 : This dissertation thematizes masculinity in Mexico's post-NAFTA configurations of subjectivities and bodies, and in the geocultural politics of race and gender in order to analyze how male identities are produced and reified within these intersecting structures of oppression. It encompasses questions of resistance, gender categories established by nationalism and late capitalism, and modern/colonial power relations. I explore cinematic and literary engagements with maleness in order to demonstrate how collusion between neoliberal economic interests and the state's established political and cultural framework of power conceals the deployment of gendered concepts of citizenship and subjectivity as a mechanism to exercise control over Mexican bodies. I conceptualize this process in terms of a violent colonial strategy of subjection which coerces men to internalize normative codes of masculinity based on essentialist categories of race, sexuality, biological sex, and space. I address relevant scholarly debates in postcolonial studies and discussions of neoliberalism's impact on culture, politics and identity. In my first chapter, I examine patriotic male performances in northern Mexico as portrayed in the novels Duelo por Miguel Pruneda (2002) and El ejército iluminado (2006) by David Toscana. I posit that through their efforts to overcome U.S. imperialism northern males in these texts are revealed as dominated subjects for whom national masculinity is a failing model for resistance. My second chapter analyzes how Carlos Reygadas's film Batalla en el cielo (2005) illustrates the disciplinary function of nationalist gender clichés through allusions to Mexican Golden Age cinema. I argue that the film's concern with revealing contradictions between idealized gender performances and actual conditions of Mexican males questions masculinity as a source of agency for brown bodies. Next, my chapter on Mario Bellatin's Salón de belleza (1994) explores the effects of globalized male ethics as manifested in the mortification of masculine bodies. I show how the failure of the narrator's strategies of subverting gender politics reflects the ineffectiveness of feminist conceptions of the ethics of care as the foundation for challenging the conditions of oppression and suffering in non-Western spaces. My final chapter demonstrates how Alfonso Cuarón's Y tu mamá también (2001) and Carlos Cuarón's Rudo y Cursi (2008) produce an intertextual farce directed at the gender codes of mexicanidad by depicting the disposability of impoverished bodies and by highlighting how the models of masculinity linked to narco culture have become the only viable form of identity for Mexican males under globalization.