The Artist In The City: Contemporary Art As Urban Intervention In Ho Chi Minh City, Vietnam, And Phnom Penh, Cambodia 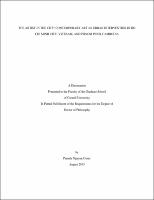 This thesis examines the development of contemporary art in Vietnam and Cambodia by introducing new ways of visually analyzing the city as a site of experience and field of representation. As part of a micro-region loosely referred to as "the Mekong," named for the river that runs through it, Ho Chi Minh City and Phnom Penh share an intimate geography despite the contentious history their respective nations of Vietnam and Cambodia have experienced for centuries. Pivotal experiences shaping the present in both cities include their colonial pasts as part of French Indochina, postcolonial "golden ages" of independence, and deep imbrication in the wars of the 1960s-70s and traumatic aftermaths including societal upheaval and genocide. New forms of artistic practice and subjectivity began to emerge in the 1990s and became especially pronounced in the first decade of the new millennium, as market-oriented economic reforms in Vietnam and procedures of democratization in Cambodia indexed new relationships to neoliberalism and globalization. While these parallel events guide the comparison of the present, the larger argument is framed by a rigorous engagement with the politics of place and possibilities of built space. As such, I let the detailed stories of two cities relate how artistic practices represent complex affiliations with city and nation, as well as a form of social and creative labor with ties to past forms of modernism. Contemporary art is thus accounted for as a historical episode, a discursive category, and a socio-spatial intervention in the urban and national landscape.