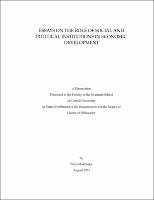 This thesis explores the causal effects of specific types of social and political institutions on economic outcomes. The first chapter presents a field experiment that investigates the role of social institutions in shaping individuals' beliefs, aspirations and eventual economic outcomes. Utilizing a priming methodology from social psychology, exogenous variation in the salience of one's social identity was introduced in treatment groups, and the long and short-run aspirations of subjects were recorded. Girls exhibit lower aspirations and beliefs when gender is primed, while high caste subjects have higher aspirations and beliefs when caste is primed. This is the first study in the literature to experimentally identify the effects of priming identity on outcomes with real stakes, and in a dynamic setting. The next two chapters investigate the role of political institutions on economic policy in the context of Indonesia. The first of these two chapters studies policy choices under two selection methods for public officials: appointments and elections. I use a novel dataset and a natural experiment, wherein districts switched from appointments to direct elections (for district mayors) in a way that can be argued to be unrelated to district characteristics. Elected mayors are significantly more likely to engage in redistributive policies than their appointed counterparts: they hire and promote a significantly greater number of civil servants, and are more likely to redistribute publicly provided goods and services to households that will be more responsive to these transfers. The last chapter goes back farther in Indonesia's political history, to Soeharto's final years in office. A large theoretical literature argues that the legacies of non-democratic regimes affect the quality of governance in new democracies, but the empirical evidence is scarce. This chapter exploits a natural experiment from the Indonesian democratic transition that generated exogenous variation on how long agents of the old regime remained in office and, hence, on the degree of control that they exerted during the transition. The results show that when old-regime mayors hold office for longer, districts exhibit worse governance outcomes. These effects persist several years after the old-regime mayors are no longer in office.