A Fuzzy-Trace Theory Approach To Health And Medical Decision-Making 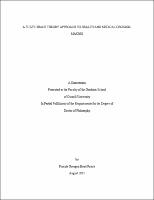 I review and test predictions of fuzzy-trace theory by bridging health and medical information with effective communications that influence decision making. First, I present an overview of the theory, describing the theory's core principles and evidence in the areas of risk perception, prevention, detection, diagnosis of disease, and decision making regarding treatment (Chapter 2). I then present findings from interventions based on fuzzy-trace theory designed to improve health and medical decision making. Fuzzy-trace theory provides guidelines for development of such interventions because it predicts reactions to health messages and explains the causal mechanisms of judgment and decision making. Second, I empirically address these predictions in a series of experiments (Chapters 3 and 4). In Chapter 3, I develop and test an intervention grounded in fuzzy-trace theory to prevent obesity (which is one of the most common risk factors for negative health outcomes). In three experiments, 864 subjects were randomly assigned to an experimental tutorial or a control tutorial with unrelated content. The experimental condition, GistFit, consisted of a static, text-based intervention (Experiment 1) or an online intervention using Sharable Knowledge Objects, a web-based tutoring system that uses artificial intelligence technology to create an Intelligent Tutoring System (ITS), GistFitITS (Experiments 2 and 3). Subjects answered questions of knowledge, gist comprehension, psychosocial mediators of behavior (e.g., attitudes, gist principles), behavioral intentions, and self-reported behavior about nutrition and fitness. The interventions improved endorsement of gist principles (or simple values). Exposure to the revised GistFitITS also resulted in significantly higher scores on gist and verbatim knowledge and gist comprehension compared to control. In Chapter 4, I further explore the benefits of using the web-based tutoring system, GistFitITS, in a randomized, controlled experiment with 251 subjects. Engagement in tutorial dialogues revealed significant correlations with knowledge tests, gist comprehension, and endorsement of gist principles, which correlated with intentions to perform healthier behavior and self-reported behavior. Overall, results were consistent with fuzzy-trace theory, suggesting that GistFitITS instills active understanding that promotes gist-based thinking, not a passive memorization of verbatim details, to assist people in making preventive health decisions.