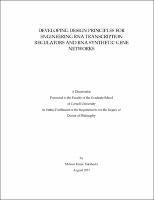 A major goal of synthetic biology is to reliably engineer microorganisms to perform a variety of functions with impact in the fields of biotechnology and medicine. Cells naturally control their behavior and process information via genetic networks - webs of interactions between cellular regulatory molecules that ultimately control when specific genes are expressed. Therefore, the route that synthetic biologists have taken to engineer microorganisms has been through constructing synthetic gene networks. Historically, these networks were built using proteins that regulate transcription, but recently RNAs have emerged as versatile molecules that can be engineered to regulate all aspects of gene expression. Aside from their versatility, RNAs offer potential advantages over protein regulators for engineering synthetic gene networks. RNAs are relatively easy to engineer due to the direct relationship between their structure and function as well as the abundance of new technologies that allow us to determine RNA secondary structures. RNA regulators are typically compact in size making networks constructed out of them easier to build. Finally, RNA networks have the potential to propagate signals faster than protein networks due to their fast degradation rates. For these reasons the focus of the work presented here has been to develop new RNA transcription regulators and to lay the groundwork for using them to build RNA synthetic gene networks. Antisense RNA transcriptional attenuators (repressors) were shown to be a key component of the synthetic biology toolbox, with their ability to serve as building blocks for both signal integration logic networks and transcriptional cascades. However, in order to build more sophisticated networks, larger libraries of orthogonal attenuators that function independently are required. To address this bottleneck we developed a strategy to create chimeric fusions between the pT181 transcriptional attenuator and other natural antisense RNA translational regulators. This strategy resulted in a library of 7 orthogonal regulators. While the strategy was successful, many of the attenuators engineered during the process did not regulate gene expression. To help understand the relationship between the structure and function of these RNA regulators we characterized their structures using in-cell SHAPE-Seq and molecular dynamics simulations. In-cell SHAPE-Seq provides nucleotide-resolution chemical reactivity spectra for RNAs that reflect their structural state within the cell. By probing functional and non-functional regulators we uncovered a design principle that brings us closer to designing chimeric attenuators in silico, thus expanding the synthetic biology toolbox even further. Next, we expand the capabilities of RNAs by engineering small transcription activating RNAs (STARs). In order to build complex RNA synthetic gene networks the ability to both activate and repress gene expression is required. However, there are no known natural small RNA (sRNA) mechanisms that activate transcription. To fill this gap, we developed two sRNA regulators to activate transcription. These STAR regulators were then used to engineer new RNA logic gates, thus expanding the RNA synthetic biology toolbox. One of the bottlenecks to developing new RNA gene networks is the slow process of testing network designs in cells. To prevent this we adapted a cell- free transcription-translation (TX-TL) system to rapidly test our RNA parts and to prototype new networks. TX-TL systems incorporate all the cellular machinery necessary for gene expression, but do so in an in vitro environment therefore bypassing the limitations that come with growing cells. We use TX-TL to prototype a new RNA network, an RNA single input module and to show that RNA networks do in fact propagate signals on the fast timescales of RNA degradation rates. Finally, we aim to expand the capabilities of RNA networks by developing an RNA genetic oscillator. Our goal is to build a dual-feedback oscillator that combines two autoregulatory network motifs - negative autoregulation and positive autoregulation using the pT181 attenuator and the best STAR regulator, respectively. We describe the progress that has been made in building these two networks as well as a path forward to engineering the RNA oscillator. Altogether the work presented here has made significant progress in our ability to engineer RNA synthetic gene networks. We anticipate that the RNA regulators and tools developed here will pave the way toward future studies of RNA structure-function principles as well as the development of new RNA networks.