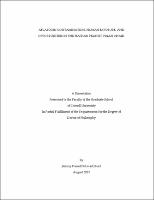 Aflatoxins (AFs) are carcinogenic, secondary metabolites of the molds Aspergillus flavus and A. parasiticus and contaminate grains and oil seeds, particularly maize and peanuts. The risk of AF contamination exists along entire peanut and maize value chains where climate is suitable, typically among tropical and sub-tropical areas. A value chain is the complete array of activities required to produce and deliver a commodity to consumers, including intermediary processing and storage. In the Caribbean country of Haiti, capacity to prevent human exposure to toxic substances, both natural and xenobiotic, is limited. The present dissertation examined: 1) constraints to AF control among peanut farmers in Haiti; 2) contamination in maize and peanut products, as well as edible oil production as an alternative process to salvage a safe, value-added product from contaminated peanuts; and 3) human exposure to AF among urban and rural communities. My formative survey of 109 peanut farmers in the North and North East Departments underscored a constrained agronomic and socio-economic context under which farmers lacked access to credit, irrigation, pesticides, and other agricultural inputs necessary to improve production and food safety. Twentythree farmers were familiar with AFs or the fungi that produce them. AF analysis of foods sampled from 2012 to 2013 showed that samples of peanuts (3/21), peanut butter (30/32), and maize (1/30) exceeded the US Food and Drug Administration limit for AFs in human foods (20 [mu]g total AFs/kg). AF concentration was greatest in peanut butters (median of 137 [mu]g/kg and maximum of 2720 [mu]g/kg). Experiments to determine residual AFs in oil pressed from contaminated peanuts showed that 5% the AF concentration of the original kernels remained in the oil. Ethanol extraction further reduced AF concentration to 10% that of the pre-extraction oil. Among Haitians screened for AF biomarkers, detection of AF-lysine in circulating blood albumin was associated with recalled frequency of peanut consumption (p=0.0486) but not maize consumption (p=0.2032). Detection of urinary AFM1 was more significantly associated with consumption of peanuts the day prior to study participation (p<0.001) than maize (p=0.105). The studies of human exposure and food contamination reported herein augur the need for suitable and timely interventions along peanut and maize value chains in Haiti.