Equine B Lymphopoiesis And Cd5+ B Lymphocytes 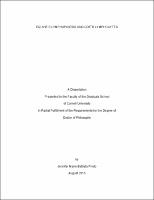 The development of the humoral immune system starts during gestation with the production of two major types of B cells: B1 and B2. B2 cells are the classic players in the adaptive humoral immunity, while B1 cells are considered components of innate immunity and have important developmental, phenotypic, and functional differences with B2 cells. B1 cells are predominant early in ontology in mice and humans; therefore, my studies of B cell development in the horse began in the primary lymphoid organs of the fetus. In the first part of my study, I tested how primary lymphoid tissues of the equine fetus were equipped to support B cell hematopoiesis and immunoglobulin (Ig) diversity of the pre-immune repertoire. I found that the equine fetal liver and the bone marrow are active sites of hematopoiesis based on the expression of signature mRNA (c-KIT, CD34, IL7R, CXCL12, IRF8, PU.1, PAX5, NOTCH1, GATA1, CEBPA) and protein markers (CD34, CD19, IgM, CD3, CD4, CD5, CD8, CD11b, CD172A) of hematopoietic development and leukocyte differentiation molecules, respectively at approximately 100 days of gestation (DG). Immunoglobulin V(D)J segments were sequenced in primary lymphoid organs of the equine fetus and adult horse, revealing that some aspects of Ig diversity in the adult were established in the fetus (similar heavy chain VDJ segment utilization, CDR3 lengths), while others were developmentally programmed (lambda light chain segment utilization, sequence diversity). These data suggest that the B cells   produced in the liver and bone marrow of the equine fetus generate a wide repertoire of pre-immune Igs for protection, and the more diverse use of different lambda variable gene segments in fetal life may provide the neonate an opportunity to respond to a wider range of antigens at birth. In the second part of my study, I tested aspects of ontogeny, phenotype, and function of equine CD5hi B cells, putative B1-like cells. The expression of CD5 can distinguish murine B1a from B2 cells, and my study tested how this marker could distinguish B1-like cells in the horse. I learned that CD5hi B cells were more frequent early in development and in the peritoneal cavity. CD5hi cells more frequently coexpressed CD2, CD21, and CD11b than CD5lo B cells in the peripheral blood when measured with flow cytometry, but had similar mRNA expression of B1 and B2 signature genes including DGKA, FGL2, PAX5, and IGHM when measured with qRTPCR. Sequencing of lambda light chain segments revealed that CD5hi and CD5lo B cells generate similar levels of immunoglobulin diversity; however, CD5hi B cells more frequently bound to fluorescence-labeled phosphorylcholine and secreted IL-10 in vitro. CD5hi B cells also represented a greater proportion of remaining B cells in horses with common variable immunodeficiency. Taken together, the results of my study show that equine CD5hi B cells share some of the same characteristics attributed to B1 cells in other species, and may be explored for immune protection in patients with humoral immunodeficiency.