Probing The Physics Of Inflation: Searching For Non-Gaussianity In The Cosmic Microwave Background And Large-Scale Structure 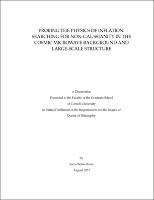 Over thirty years since an early epoch of inflation was proposed as an elegant way solution to the Big Bang's flatness, horizon, and monopole problems, recent theoretical and observational advances have made it possible to robustly test the physics of inflation using a variety of cosmological probes. It is now known that the higher-order correlators of primordial fluctuations beyond the power spectrum, starting with the bispectrum (or 'shape'), is highly sensitive to the specific physical model of inflation, and this has motivated an intense effort to robustly extract bispectrum constraints from current and upcoming data sets. This thesis aims to build on existing methods for reconstructing the amplitude and wavenumber-dependence of primordial bispectra and making robust inferences about the inflationary physics of our Universe, given cosmic microwave background (CMB) data from Planck and future large-scale structure (LSS) surveys, such as DESI and Euclid. We present forecasted constraints from CMB bispectrum data for a range of inflationary shapes, ranging from fixed individual templates, which are meant to represent distinctive features of large classes of physical models, to more general shapes and joint constraints on sets of shapes, which are important for quantifying how well the data may be able to detect bispectrum signatures that are not already theoretically predicted, and how well it may distinguish be- tween competing theories. In addition, to better model general bispectra that may have complex behavior on squeezed triangle configurations of (k1 , k2 , k3 ), we created an alternative divergent basis for reconstructing bispectra. Next, we extend this analysis to a wholly different probe of inflation that will become available when large galaxy surveys come online in the next decade: the scale-dependent halo bias as measured from galaxy power spectra. Our analysis shows that the two probes of bispectra from the CMB and LSS can be quite complementary, especially if we can obtain a strong prior on the galaxy bias from external data sets. We also show that although previous analyses have focused on the large-scale halo bias, the small-scale halo bias also contains information that can be used to constrain and discriminate between models. Finally, we narrow our focus to a class of inflationary theories that have non-trivial initial quantum states for the inflaton, as these models have in the past not been well-constrained due to the limitations of current reconstruction methods. We present an alternative basis, derived from b-splines, which can reconstruct the sharp localized peaks and oscillatory features typical of bispectra in these models, and show that the b-spline basis is competitive with other choices of basis, partly because b-spline basis functions are more easily generated.