From Looking Backward To Looking Forward: On Consuming The Anticipation Of Experiential And Material Purchases 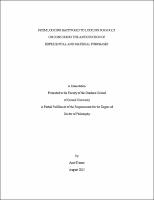 When it comes to enhancing consumer welfare, psychological research suggests that people can get a better hedonic return on their money if they opt to buy experiences instead of material possessions. While the existing literature demonstrates that experiential purchases provide more enduring happiness than material purchases in recall, the present investigation is the first to explore differences that occur before purchases have been made. It demonstrates that anticipatory states are more positive when one is thinking about future experiential consumption than when one is considering future material consumption. It further goes on to show that people often delay their consumption of upcoming experiential purchases in order to prolong these pleasurable feelings. And finally, reasons for why the anticipation of experiential purchases tends to be more rewarding are examined. People reliably talk to others more about their impending experiences than their soon-to-be-bought material goods and they derive considerable hedonic benefits from doing so. These conclusions are arrived at using diverse methods, including surveys, experiments, experience sampling, and an archival analysis. The research reported here adds to the growing body of evidence that there is more satisfaction to be had from spending on doing rather than having, and, notably, that this recommendation is robust across a rather broad time course.