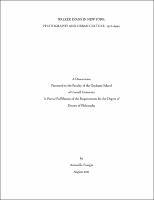 This dissertation offers the first systematic study of the photographs taken by Walker Evans in New York City and its vicinity between 1927 and 1934, a formative period that preceded the full consecration of his work in the second half of the 1930s. About 200 urban photographs in the collection of the J. Paul Getty Museum and a significant body of negatives in the Metropolitan Museum's Walker Evans Archive indicate that Evans's early work was mostly devoted to the theme of the modern metropolis. Cross-referencing Evans's images with contemporary photographs, aerial views, architectural plans, insurance maps, drawings, and verbal descriptions, this study aims to identify the exact subjects, the places, and whenever possible the dates of this previously uncharted body of urban photographs. The resulting catalog of over 300 images suggests the contours of an unfinished project on New York City that Evans developed in the years immediately preceding and following the Wall Street crash of 1929. On a different level, this dissertation addresses the question of Evans's visual education in the context of the "transatlantic modernism" of the 1920s and '30s. In particular, it shows that Evans, despite his early literary ambitions, was fully conversant with the work of visual artists, architects, and critics of the Machine Age. Long ignored and often discredited as mere experiments in the fashionable style of the New Vision, his early photographs incorporated and developed the critique of American modernism offered by such books as Le Corbusier's Vers une architecture (1923) and Erich Mendelsohn's Amerika. Bilderbuch eines Architekten (1926). At the same time, his New York project shared the quest for an American art widely debated in avant-garde magazines and was consonant with the work of many painters later known as Precisionist.