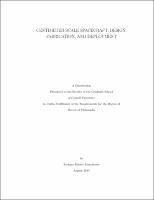 The rise of the consumer electronics industry has led to a profusion of ever smaller, cheaper, and more capable devices, from sensors to computers to radios. Many of these components are suitable for use in spacecraft. Their availability has led to the ongoing revolution in small satellites, most visibly exemplified by the CubeSat standard. This study seeks to push these trends toward their ultimate extreme: a satellite-on-a-chip. The ability to mass produce small, cheap, essentially disposable spacecraft has many implications for space exploration, Earth and atmospheric science, and education. New missions to characterize planetary surfaces and atmospheres, asteroids, and Earth's ionosphere could be planned using thousands of tiny spacecraft equipped with a variety of sensors. Such mission architectures would allow thousands of data points to be captured simultaneously across vast distances, offering unprecedented spatial resolution. Additionally, the cost of launching a satellite will be within reach for high schools, student groups, and even individual hobbyists, making space accessible to the general public in new ways. This dissertation documents the development of the Sprite centimeter-scale spacecraft, along with the associated hardware and software necessary for its deployment in low-Earth orbit and communication with ground stations. In addition, new solutions to several general spacecraft dynamics, control, and estimation problems with relevance to small and low-cost spacecraft are presented. These include control laws for flat-spin recovery and spin inversion, an algorithm for on-orbit inertia estimation, and variational integrators for spacecraft attitude dynamics that offer improved performance over traditional Runge-Kutta schemes in spacecraft guidance, navigation, and control applications.