Architectural Chinoiserie In Germany: Micro- And Macro-Approaches To Historical Research 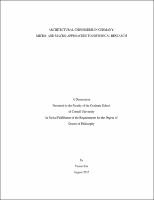 This research deals with Chinoiserie architecture in Germany during the eighteenth century and the early nineteenth century. The purpose of this research is not to describe the developmental process of this style in detail but to explore two different scopes of conducting historical research for historic architecture-a micro approach and a macro approach. The former approach focuses on individual buildings and describes their history by integrating written records and archaeological evidence, particularly the wood elements in the old structure. The latter approach takes a higher perspective and looks at the formation of the style, especially demonstrating the social dynamics that supported the movement of the ideas and objects. Taking the Chinese Tower in Donaustauf as an example, the first part of this work investigates the history of the Chinoiserie building with the help of two archaeological investigation techniques- wood anatomy and dendrochronology. It investigates its technical/design details and explains its construction history. The second part of this work seeks the reasons that Chinoiserie chose these design elements by examining its social context. Several studies by previous scholars have demonstrated the important role of the nobility in the diffusion of this pseudo-Chinese fashion. Using the methods of social network analysis, three factors are examined that may have influenced the choice of paradigms among the patrons of the buildings: iii geographical adjacency, personal contact, and kinship. The statistical results of the Quadratic Assignment Procedure (QAP) indicate that patrons' usage of paradigms is considerably correlated with their kinship, which improves our understanding of the significance of the genealogical relationship in influencing the taste in design and construction and the reception of foreign cultures. iv