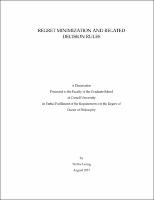 Our starting point is a setting where a decision maker's uncertainty is represented by a set of probability measures, rather than a single measure. Measureby-measure (a.k.a. prior-by-prior) updating of such a set of measures upon acquiring new information is well-known to suffer from problems. To deal with these problems, we propose using weighted sets of probabilities: a representation where each measure is associated with a weight, which denotes its significance. We describe a natural approach to updating in such a situation. We then show how this representation can be used in decision-making, by modifying a standard approach to decision making-minimizing expected regret-to obtain minimax weighted expected regret (MWER). We provide an axiomatization that characterizes preferences induced by MWER both in the static and dynamic case. This same concept of weighted probability distributions can also be applied to the widely-studied maxmin expected utility decision rule. Chateauneuf and Faro [2009] axiomatize a weighted version of maxmin expected utility over acts with nonnegative utilities, where weights are represented by a confidence function. We argue that their representation is only one of many possible, and we axiomatize a more natural form of maxmin weighted expected utility. We also provide stronger uniqueness results. Next, we apply regret-minimization to dynamic decision problems. The menu-dependent nature of regret-minimization creates subtleties when it is ap- plied to dynamic decision problems. If forgone opportunities are included, we can characterize when a form of dynamic consistency is guaranteed. Finally, we look at a "dual" of minimax regret, called maximin safety. Much as regret is a form of distance to the best possible outcome, safety is a form of distance to be worst possible outcome. The idea behind maximin safety is that one would want to maximize the distance between one's choice and the worst possible outcome. This decision rule might be appropriate in cases where it is important not to be "the last person", for instance when a group of hikers is being chased by a bear. We examine its behavioral motivations and provide an axiomatization for the decision rule.