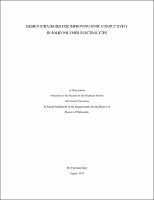 Lithium-ion batteries are important in many aspects of modern life from portable electronics to electric vehicles. Their high specific energy, light weight, and design flexibility make them especially useful compared to other types of battery technologies. However, there remains room for improvement with regards to battery stability, safety, and increased capacity. One strategy for making lithium batteries both safer and more practical is by using solid polymer electrolytes (SPEs). Not only does the replacement of small molecule liquid electrolytes by SPEs significantly reduce the flammability of the battery, SPEs also make possible the construction of lighter weight batteries with increased flexibility in form factor. However, SPEs have not been widely incorporated into commercial batteries at the current time. Their applications are limited primarily due to their relatively low conductivities (~10-5 S/cm) at ambient temperatures. The first project describes the synthesis and characterization of a set of polyester-based polymer electrolytes. The polyesters were synthesized using transition metal-catalyzed alternating copolymerization of epoxides and anhydrides, which allowed the incorporation of a variety of Li+ ion coordinating functional groups including allyl ethers, pendant oligo(ethylene glycol), and esters. The bulk properties of the polymers and polymer-salt mixtures were investigated and compared to results from molecular dynamics (MD) simulations. The simulations were also used to probe the mechanism of Li + binding and transport in the polyesters. The simulations suggested that the relatively low Li + conductivity of the polyesters compared to PEO was most likely due to a lower than optimal density and spacing of the Li + binding sites in the polyesters. The insights from the polyester study were used to design a set of polyethers to further elucidate the source of PEO's unusually high ionic conductivity, as well as potentially improve the conductivity by further optimizing binding site connectivity. The polyethers were synthesized using acyclic diene metathesis (ADMET) polymerization, and a set of polymers was made with very specific and systematic alterations in structure. By studying the ionic conductivity as a function of temperature, we were able to analyze the effect of binding group density and pattern on the ionic conductivity and Li + ion transport mechanism in polyethers. The third project was inspired by the search for catalysts to develop novel high performance materials. Enantioselective [beta]-diiminate zinc catalysts were designed for the synthesis of highly isotactic polycarbonates from CO2 and meso epoxides. The ligand optimization process is described, as well as the characterization of the catalyst and isotactic poly(cyclohexene carbonate).