The Effects Of Iron-Biofortified Beans On Iron Status, Physical Performance, And Physical Activity In Rwandan Women 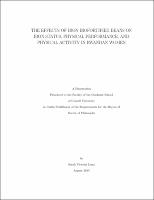 Improving hemoglobin and iron status through the supplementation of high doses of iron has been shown to improve measures of physical performance such as maximal oxygen uptake (VO2 max) and work efficiency, which are important predictors of the ability to perform consistent physical work. The purpose of the present study was to investigate changes in physical performance and free-living physical activity in response to changes in iron status from consuming iron-biofortfied beans. One hundred and thirty-six Rwandan women age 18-27 participated in an 18-week efficacy trial designed as a randomized controlled trial. The women were randomized to one of two groups: one was served iron-biofortified beans and the other a control bean; beans are a typical part of the Rwandan diet. Iron status and physical performance were assessed at the start of the study, at one of eight randomly assigned midpoints, and at the end of 18 weeks. Physical performance was evaluated through determination of VO2 max and work efficiency using a single cycle ergometer submaximal protocol. Free-living physical activity was measured via accelerometer for five consecutive days at baseline and endline. Results show strong evidence for the efficacy of biofortified beans to improve iron status in this population. There was an overall decline in physical fitness evidenced by significant weight gain, decrease in VO2 max, and decline in minutes spent in non-sedentary physical activity. However, consuming biofortified beans attenuated the decline in VO2 max and, in a subset of participants, the decline in minutes spent in light physical activity.