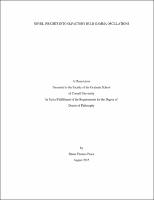 In the rodent olfactory bulb (OB), coherent gamma oscillations (40-100 Hz) in the local field potential are readily observed during active odor investigation and are thought to be necessary for high resolution odorant constructions. These oscillations are believed to be coordinated by dendrodendritic connections in the external plexiform layer (EPL) where the excitatory mitral cells receive inhibitory, GABAergic feedback from granule cells. Currently, the predominant theories of gamma oscillation rhythmogenesis are insufficient to fully describe the complex characteristics of bulbar gamma oscillations. The goal of the presented research was to utilize novel recording techniques to more fully describe the network mechanisms that generate gamma oscillations in the rodent OB. To investigate synchronous activity in the OB, we recorded from OB slices from mice coexpressing channelrhodopsin-2 and enhanced yellow fluorescent protein under the control of the olfactory marker protein, hence limiting expression to the olfactory sensory neuron axonal arbors innervating the glomerular layer of the slices. To enable large area recordings across the olfactory bulb slice, we used a 60-electrode planar microelectrode array to record spike and local field activity. A brief (5 second) flash (4 Hz) of a blue light stimulus or the brief application of metabotropic glutamate receptor agonists and an acetylcholine receptor agonist were used to induce long-lasting (>5 minutes) gamma oscillations (20-55Hz) that were coherent across ranges of up to 300 [MICRO SIGN]m across the OB slice. Contrary to current theories of OB gamma oscillogenesis, blocking bulbar GABA(A) receptor activity did not reduce the power of the gamma band oscillations but did reduce the oscillation frequency. Furthermore, GABAergic blockade eliminated the coherence between oscillating glomerular columns. To explain these results, I propose a hybrid coupled-oscillator model of bulbar oscillogenesis, in which lateral GABAergic feedback couples and synchronizes independent intraglomerular oscillators that rely on non-GABAergic coordination mechanisms, primarily mitral cell subthreshold oscillations (STOs). These STOs function to synchronize the spiking of the mitral cells. Our model predicts the gamma oscillation frequency is influenced by the repetitive GABAergic reset of mitral cell STOs increasing the overall frequency of the oscillatory network. Extensive GABAergic feedback across the external plexiform layer is further necessary to synchronize the intraglomerular oscillations across the bulb producing the coherent gamma oscillations recorded in vivo. To increase the resolution of electrophysiological recordings within the bulbar region producing coherent oscillations, we developed a 768-channel MEA designed with decreased distance between recording electrodes. Our MEA also employed angle sensitive pixels that are optical receptors capable of detecting and reconstructing the patterns of optical stimulation used to excite the transgenic slices. These sensors were positioned among the recording electrodes of the MEA in order to combine optical and electrophysiological recordings.