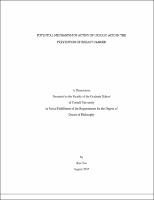 Currently, breast cancer becomes the most frequently diagnosed and the second deadly cancer among women in United States. American Cancer Society reported that an estimated 234,190 new cases of diagnosed and 40,730 new cases of death would occur in United States in 2015. Despite of sex, age, race, pregnancy, breastfeeding and other factors, current therapies, such as breast-conserving surgery (BCS), radiation therapy and systemic therapy (hormone and targeted therapy) seem no longer effectively to control the growth of human breast cancer. Thus, there is an increasing demand to develop effective and alternative cancer treatments to improve the current breast cancer therapies and optimize the recovery procedure. Phytochemicals from fruits and vegetables are suggested to be associated with reducing the risk of chronic diseases, such as cancer. The advantages of choosing phytochemical as anticancer agents such as easily approachable, large diversity make them great potential to be developed to a new treatment for cancer. For example, EGCG and quercetin, widely distributed in fruits and vegetables, have been reported to exhibit high antioxidant, anti-inflammatory and anti-cancer effects. However, the molecular mechanism of actions of phytochemicals in the prevention of cancer is not fully understood yet. In my Ph.D. project, ursolic acid (UA), a triterpenoid, has been used for anti- proliferation and cytotoxicity studies towards MDA-MB-231 human breast cancer cells by methylene blue assay. Results determined that cell proliferation of MDA-MB231 cells can be effectively inhibited by ursolic acid in a non-cytotoxic concentration range. Thus, UA was chosen as candidate phytochemical in the study of signaling pathways in MDA-MB-231 cells, specifically focused on anti-proliferation and apoptosis pathways. On the anti-proliferation signaling pathway, the expressions of a serious of key proteins, including PCNA, CDK-4, cyclinD1, p21, p-p53, p-p38, pASK 1 and TRAF-2, were all measured by immunoblotting assay. Results demonstrated that there was a dose-dependent relationship between UA concentrations and expression of all these proteins. In addition, p38 inhibitor study showed the reversing effect on the expression of PCNA and CyclinD1 inhibited by UA. In the apoptosis signaling pathway, the expressions of Bax, Bxl-2 and cleaved caspase-9 and 3 were also measured by immunoblotting assay. Data suggested that UA induce mitochondria apoptotic pathway in MDA-MB-231 in a dose-dependent manner. Moreover, apoptosis effect induced by UA was also confirmed by TUNEL assay. At last, two-way combination studies on UA and other phytochemicals (EGCG, quercetin, and resveratrol) were performed to test the additive and synergistic effect in MDA-MB-231 cells. Results revealed that combinations of these phytochemicals exhibited the additive and potential synergistic effect in MDA-MB-231 cells. Future work on three- or more way of combination is necessary to elucidate the mechanism of synergy among phytochemicals in fruits and vegetables In summary, ursolic acid had anti-proliferative effect in MDA-MB-231 human breast cancer cells through p38/MAP kinase pathway by regulating cell cycle cyclinD1/CDK family and PCNA proteins. Meanwhile, ursolic acid induced apoptosis through mitochondria death pathway by regulating the expression of Bax/Bcl-2 family proteins and caspase family proteins through p38/MAP kinase pathway. Ursolic acid had additive and potential synergistic effect with other phytochemicals. These data provide insights in developing new cancer therapy using ursolic acid and other phytochemicals.