Outflows And Accretion At The Disk-Magnetosphere Boundary 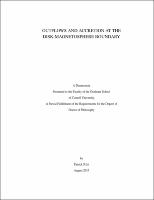 Accreting magnetized stars are ubiquitous throughout astrophysics and can be found in a variety of astrophysical contexts at both the dawning and closing stages of stellar evolution. These include the young stars at the center of T Tauri-type systems, accreting white dwarfs in cataclysmic variables as well as neutron stars found in low-mass X-ray binaries. The interaction between these stars and their accretion discs is a process which is fundamental to astrophysics: of particular importance is the disc-magnetosphere interaction which determines many of the spectral and time-variable photometric signatures observed in these systems. However, direct imaging of the disc-magnetosphere boundary is observationally challenging due to current resolution limitations while purely analytical studies are difficult due to the highly non-linear nature of magnetohydrodynamic interactions. Simulations bridge the gap between theory and observation and permit us to model the complex interactions in the inner disc with unprecedented detail. In this work, we present the results of pioneering magnetohydrodynamic (MHD) simulations of accretion, planet migration and outflow phenomena at the discmagnetosphere boundary and in the inner disc. In order to investigate these processes, we have developed scalable, high-resolution Godunov-type MHD codes in 2.5D axisymmetric cylindrical, 2D plane polar, and fully 3D cylindrical coordinates aimed at studying accretion driven by the magnetorotational instability as well as the discmagnetosphere interaction. The codes support the inclusion of a planetary perturber and include modules for [alpha]-type viscosity and diffusivity in the disc. Our MHD simulations have established the occurrence of long-lasting outflows in both slowly and rapidly rotating stars. In the slowly rotating regime where rm [LESS-THAN OR EQUAL TO] rc , a well-collimated outflow is launched from the disc-magnetosphere boundary in regimes where the accretion rate is high and the stellar dipole is strongly compressed. The models show that the matter outflows from the disc-magnetosphere boundary with halfopening angles [theta] = 20[-]30? and is collimated by the toroidal magnetic field such that the opening angle narrows to [theta] = 4 [-] 20? at the edge of the simulation region. The outflow velocities range from 30 km s[-]1 at the outer edge of the jet to more than 260 km s[-]1 in the interior regions. This outflow mechanism may help to explain the spectral features observed in the major accretion events associated with FU Orionis and EX Lupi-type outbursts as well as the powerful bipolar jets observed in T Tauri systems. In the rapidly rotating propeller regime of accretion where the magnetosphere rotates faster than the inner disk, the MHD models show the emergence a matter-dominated magnetocentrifugal outflow driven from the disc-magnetosphere boundary. However, unlike the outflow in slower rotating regime, the propeller outflow is primarily rotationpowered and can launch a large majority of the accreting matter into a wide angle propeller wind ([theta] ~ 45? ). If the accretion rate exceeds the ejection rate, the accretion onto the star proceeds episodically through a cyclic accumulation-accretion mechanism in which episodes of matter accumulation are followed by a brief episode of simultaneous ejection and accretion onto the star. This cyclic accumulation-accretion mechanism may explain the decahertz flaring observed in some accreting millisecond pulsars expected to be in the propeller regime of accretion. These propeller-driven outflows efficiently transport angular momentum away from the star and may be largely responsible for the rapid spin-down of stars in the propeller regime. While the star-disc interaction is critical for understanding the inner disc dynamics, planet-disc interactions play a dominant role in determining the final period-mass distribution of planets discovered by modern exoplanet surveys. Protoplanetary discs can have large central cavities at the dust sublimation radius or the disc-magnetosphere boundary. Using 2D simulations, Masset et al. 2006 showed that migrating planets which encounter the positive surface density gradient at the disc-cavity boundary may become stably trapped due to the action of the corotation torque. We build on their work and study the disc-planet interaction for planets with initial orbits inside, outside, and coincident with the disc-cavity boundary in both 2D and 3D hydrodynamic simulations. We find that the trapping mechanism persists in the 3D simulations, with migration rates that depend on the surface density profile at the surface density transition. The trapping mechanism is robust and may cause the planet to migrate inward or outward in tandem with the disc-cavity boundary which may move as the young star evolves along the Hayashi track toward the main sequence.