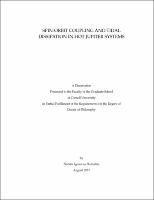 Hot Jupiters are giant planets located extremely close to their host stars, with orbital periods less than 5 days. Many aspects of hot Jupiter (HJ) formation remain unclear, but several clues, such as the observed misalignment between their orbital axes and their hosts' spin axes, point to a dynamical origin. In the first portion of this work we explore the stellar spin-orbit dynamics of one such dynamical formation channel, the Lidov-Kozai mechanism. We show that the coupling between the stellar spin and the planet orbit can lead to complex, and sometimes chaotic, behavior of the stellar spin vector. Many features of this behavior arise due to a set of resonances between the stellar spin axis precession timescale and the Lidov-Kozai timescale. Under the assumption that the stellar quadrupole does not induce precession in the planet's orbit, given a system with a set of initial parameters, we show that it is possible to predict whether the system can attain high spin-orbit misalignments. In the second portion of this work, we discuss tidal dissipation in giant planets, another aspect that is crucial to dynamical HJ formation theories. We show that tidal dissipation in the cores of giant planets can be significant, and can help reconcile inconsistencies in the tidal dissipation efficiencies inferred from observations of Jupiter's moons and from high-eccentricity HJ migration theories. Finally, we improve upon existing core tidal dissipation theories by presenting semi-analytical formulae for dissipation in a core surrounded by a polytropic n = 1 envelope.