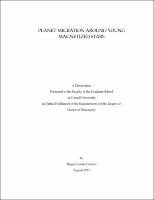 We investigate the migration of low-mass planets (5M⊕ and 20M⊕ ) in accretion disks threaded with a magnetic field using a 2D magnetohydrodynamic (MHD) code in polar coordinates. We observed that, in the case of a strong azimuthal magnetic field where the plasma parameter is [beta] ~ 1 [-] 2, density waves at the magnetic resonances exert a positive torque on the planet and may slow down or reverse its migration. However, when the magnetic field is weaker (i.e., the plasma parameter [beta] is relatively large), then non-axisymmetric density waves excited by the planet lead to growth of the radial component of the field and, subsequently, to development of the magneto-rotational instability, such that the disk becomes turbulent. Migration in a turbulent disk is stochastic, and the migration direction may change as such. To understand migration in a turbulent disk, both the interaction between a planet and individual turbulent cells, as well as the interaction between a planet and ordered density waves, have been investigated.