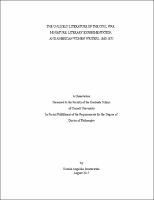 Probing the periodic ceasura between antebellum and postbellum literature, this dissertation locates in ostensibly apolitical literature of the 1860s and 1870s an addendum to war literature in which the Civil War with its larger social consequences finds its translation into a new narrative of white middle-class womanhood. This narrative of womanhood, and its accompanying aesthetic, is exemplified by the work of Harriet Prescott Spofford, Elizabeth Stoddard, and Sarah Piatt. Taking as its point of departure the recovery of these three authors as literary "outliers" especially prolific in this period, the dissertation combines close readings of their work with an examination of nineteenth-century and contemporary criticism in mapping the rootedness of their writing in cultural phenomena, objects, events, and socio-political changes brought about by the Civil War. These links on the one hand anchor their writing in the context of the period and in ephemeral referents (such as news items, fleeting cultural trends and images) and, on the other, lend it a dialogic quality that puts their prose and poetry in conversation not only with other genres of writing but also with other artistic media. The dissertation argues that attempts to read their work in connection to either antebellum or to postbellum literary culture leads to obscuring its ephemeral and timely links to the Civil War and its immediate aftermath as well as obscuring its experimental character. The new freedoms, temptations, and images of women that emerge in these texts examined in the dissertation speak to the impact of the war on writing that positions itself as apolitical. In articulating these new desires as well as new freedoms and challenges to them brought about by the war, the texts rely on a reversal of scale between the private world of the characters and the outside world. The narrative of white middle-class femininity that emerges from this literature offers itself up as a counterpart to war literature in that it dramatizes and imaginatively translates the profound cultural, social, and political changes brought about by the Civil War.