The Politics Of “Storytelling”: Schemas Of Time And Space In Japan’S Traveling Imagination Of Semi-Colonial China And Beyond, 1920S-1980S 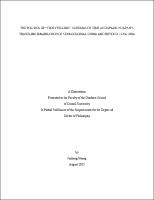 Centered on the works of three Japanese writers, namely Akutagawa Ryūnosuke (1892-1927), Hayashi Kyōko (1930- ), and Takeda Taijun (1912-1976), and with references to many other writers such as Tanizaki Jun'ichirō, Yokomitsu Riichi, and Takeuchi Yoshimi, in this dissertation I look into those narrative accounts for a changing pattern in their structure of storytelling about semi-colonial China. My project is in many ways indebted to but also fundamentally different from studies of Sino-Japanese cultural exchanges under semicolonialism, in the sense that it is a subtle literary analysis organized around a theoretical problematic, rather than an effort for a comprehensive history. I highlight the politics of storytelling in our texts by examining the temporality and spatiality, narrative devices, linguistic politics, and so on in the writer's storytelling. I take the literary texts discussed in this dissertation as always socially constructed, and as "narrative accounts" that consist of elements of figuration, rather than considering them as the unmediated reproduction of the historical "truth" about the writers or about the Chinese and Japanese societies they traveled/lived in and between. Chapter One is a careful examination of Akutagawa Ryūnosuke's narrative of prewar China, entitled Travels in China. Chapter Two focuses on the politics of storytelling in Hayashi Kyōko's autobiographical novel Michelle Lipstick (1980), read together with several other works of hers. Chapter Three is organized around discussions of three major works on China by Takeda, entitled Sima Qian (Shiba Sen, 1943), The Judgment (Shinpan, 1947), and Shanghai Firefly (Shanhai no hotaru, 1976), while referring to several of his essays written between those years as secondary materials. I reach two conclusions. First, I contend that there is an obvious shift in the ways that prewar and postwar Japanese writers construct the time and space of semicolonial China in their works. And secondly, I hold that the allegorical meaning of storytelling lies in the space it opens up for literary critics and literary historians to access the relations between the writer, the narrator, and the surrounding social space, which, in my opinion, are the reality of the past that we have been trying to find in literature.