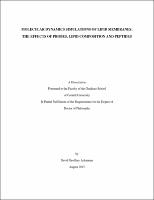 The cell plasma membrane is comprised of hundreds of different lipid species as well as a variety of integral and peripheral proteins. The diversity of molecular constituents leads to the formation of functional lateral heterogeneities within the plane of the membrane, known as lipid rafts, which are distinct from the surrounding membrane. Given the complexity of the plasma membrane, and the importance of rafts in the life of a cell, simplified model mixtures capturing the characteristics of the plasma membrane have been essential for unraveling its underlying behavior. In this work, we use molecular dynamics simulations to study model membranes at resolutions not possible with experimental techniques. We first investigated a fundamental assumption in model membrane experiments: that extrinsic probes added to the membrane do not disrupt membrane behavior. We addressed this issue by simulating single component model membranes that contained commonly used fluorescent lipid analogs. We found that the probes are able to disorder the bilayer and reorient lipid headgroups due to the probes' large, positively charged headgroups and long, interdigitating acyl chains. Importantly though, these effects die off within a couple of nanometers of the probe. This means that the probes do not disrupt large-scale membrane behavior and can effectively be used for experimental membrane studies. However, the short-ranged perturbations also indicate that probes may provide incorrect information if they report directly on their local, disrupted, environment. Next, we studied the behavior of more complex model membranes containing multiple lipid species. Experimentally, model membranes comprised of four lipid components can yield coexisting phases, mimicking raft and non-raft environments, ranging in size from nanometers to microns. Through simulations, we found that domain size and alignment are highly coupled and that they both change abruptly at certain lipid compositions. We also found that the phase interface between domains was only a couple of nanometers wide regardless of the properties of the two coexisting phases. Addition of transmembrane [alpha]-helical peptides of various lengths to the lipid-only mixtures significantly increased both domain size and alignment. These effects were largest for the shortest peptides and increased with peptide concentration. Thus cells may be able to control raft size and alignment, and in turn a variety of cellular processes, simply by altering lipid and protein concentrations.