After The ‘Devil Cloud’: Navigating Modernity In The Wake Of The 1913 Easter Sunday Tornado In Omaha, Nebraska 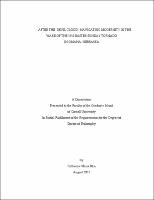 In this dissertation, I use a localized "natural" disaster as a way of sifting through the competing ideologies, priorities, and power structures of a developing city in the embryonic stages of what we now often consider "modern" America. My research challenges dominant narratives of the United States' march toward modernity as a relatively linear transformation, one where traditional and conservative ways of understanding the world died with the Victorian Era, and emerged fully formed by the end of the first World War. The first few decades of the twentieth century reveal that not only was this process not at all linear, even, or easily explained, but that it was full of contradictions and fraught with confusion. Omaha's 1913 Easter Tornado ripped a swath through the city, and the destruction and disruption to the city offers a way in to better understand the tensions within a young western city at a pivotal time in the United States' history. Chapter One surveys Omaha's political landscape in 1913, particularly the machine-controlled city government. This chapter attempts to disentangle Omaha's power structures-both official and otherwise-and provides a crucial stage for the actions in the following chapters. Chapter Two examines the development of relief apparatus both within the city and outside of it. Chapter Three studies the structures of power within post-storm Omaha, particularly the members of a hierarchical structure of relief committees empowered to act on behalf of the city, and more often concerned with Omaha's national business reputation than with the welfare of individual victims. The concern for business interests also launches an exploration of the perception and existence of federal aid in the early twentieth century. Chapter Four considers the ways in which Omahans sought to understand the storm on an individual level, primarily through the lenses of religious explanations and scientific understanding. Finally, in Chapter Five, I analyze the construction of narratives about the tornado in the year immediately after the storm and the ways in which certain storylines or themes about Omaha, its citizens, or racial minorities were promulgated or challenged with the help of the Easter twister.