"Terror, The Order Of The Day": The French Revolutionary Terror And Its Restagings. 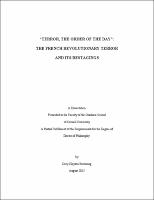 This dissertation examines the relationship between terror and democracy in modern French and Francophone history, political theory, culture and literature. It focuses on the Terror and three moments when the Terror resurfaces with explosive force: French Romanticism, the advent of avantgarde theater and anarcho-terrorism in the wake of the Paris Commune and, finally, the Algerian War. Rather than look to the Terror as a founding moment in order to lay bare a monolithic, transhistorical, ontological "truth," my dissertation, following Foucault, ventures to rethink the Terror genealogically, as a singular event whose various restagings do not coalesce but rather open up diverse modalities of thinking democracy and terror. Recasting Marx's observation that we make our own history but under conditions handed down from the past, my research strives to apprehend the multiplicity of the Terror has played in shaping what we say, think and do. On one hand, the Terror poses an obstacle to democracy, an intractable weight it relentlessly struggles to jettison, often at its own peril. On the other hand, the Terror has the potential to explode present conditions, offering modes of resisting the present and means to radically reconfigure it. The introduction sets out the stakes by challenging the dominant mode of investigating the Terror postwar: the Terror as precursor to totalitarianism. I demonstrate that by conflating the Terror and totalitarianism, this mode of interpretation inscribes the Terror into the very essence of democracy, making it into a pathological potential that must be contained. I further trace how this mode informs Agamben's biopolitical reading of democracy via the camp and address current research on aesthetics and affect that challenge the dominant mode of reading the Terror. The first chapter analyzes French Romanticism via the epithet "93 littéraire," an insult that Victor Hugo would come to embrace and develop, transposing the French Revolution, including the Terror, into poetry and prose such that literature would inherently serve democracy. I argue that Hugo did indeed develop a theory and practice of literature and democracy, one that anticipates the work of Sartre, Macherey, and Rancière. However, in inscribing "literary terror" into literary democracy, I further contend that Hugo serves to challenge and broaden these theories by pointing to the persistence of the politico-theological, not in political theory, but in literature and aesthetics. The second chapter looks to a restaging of this accusation, "La Terreur littéraire," as it was hurled at the stage in performances of Alfred Jarry's Ubu roi. I argue that avant-garde theater developed as both a continuation and transformation of anarcho-terrorism and its reinterpretation of the Terror following the Paris Commune. Through original archival work, I demonstrate that the anarchists, especially in the Marx-Bakunin debate, came to understand Jacobinism not as an ideological worldview but as a form of sensibilité. To counter this legacy, anarcho-terrorism, I claim, sought to open up new modes of perception by violently transforming material reality. It is through this frame that I then read Jarry's allusions to anarcho-terrorist attacks in his theory and practice of theater. I argue that Jarry and the anarchists suggest a properly anarchic aesthetic education that would not lead to an Aesthetic State as in Schiller's response to the Terror. The third chapter analyzes terrorism and its representations in the theory and practice of emancipatory violence during the Algerian War. I examine Zohra Drif's apology for terrorism, in which she rejects André Malraux and Albert Camus' literary constructions of the terrorist as a twentieth-century Saint-Just, in order to reframe how we read Hegel and the Terror in the context of colonial struggle. I argue that Drif and Fanon challenge the binary that pits ideas against lived experience; rather violence is an "absolute praxis" that may open up to new experiences and ideas.