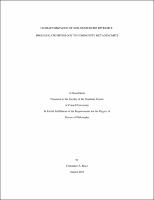 Denitrification is a part of the global nitrogen cycle in which reactive nitrogen in the biosphere is returned to the atmosphere, and is mediated by diverse communities of microorganisms. The work in this thesis was undertaken to gain a greater understanding of the ecology of denitrifying microorganisms. A combination of bioinformatic analysis of denitrification genes in pure cultures and environmental samples, as well as experimental work with denitrifying bacterial cultures and soil microcosms was performed to understand the relationship between genes and ecosystems in denitrification. First, we examined the diversity of denitrifiers in soil through genome sequencing of microbial isolates coupled to denitrification gas kinetic measurements. The results suggest that partial denitrifiers are common among soil bacteria and it was demonstrated that nitrogen oxide production could not always be predicted by the genetic potential of the isolates. This reveals there are different regulatory effects on each step of the denitrification pathway, which dictate the accumulation of denitrification products. Secondly, the prevalence of dissimilatory reduction of nitrate under aerobic conditions in soil was assessed. Bacteria capable of aerobic nitrate reduction were easily isolated and found to reduce nitrate at oxygen concentrations greater than levels associated with the onset of nitrite reduction and the genomic analysis of the nitrate reductase genes revealed a wide diversity of physiological controls. Finally, a soil microcosm study was performed to determine the influence of oxygen on denitrification gas kinetics and denitrifier community structure. Comparison of soils exposed to oxic, short anoxic and long anoxic conditions revealed the oxic soils had fastest denitrification rates, indicating denitrifiers were not hindered by oxic conditions. The genetic community structure, characterized through metagenomic and metatranscriptomic analysis, was shown to be an important factor in determining denitrification rates and end product ratios. In conclusion, denitrification is a complex pathway of ecological importance that is controlled by the interaction between genes and environmental factors. In order to develop useful tools to mitigate reactive nitrogen and other climate-forcing nitrogen species, a comprehensive understanding of the regulatory network of denitrification with respect to microbial physiology and environmental interactions is needed.