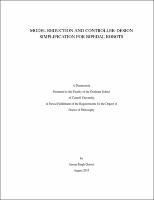 The main aims of a bipedal walking robot are to avoid falling and to generally move forward. Towards this end we consider controller reduction. This includes: What is the minimal set of states that a controller needs to sense in order to decide the required control actions? What is the minimal set of control actions that a controller needs to provide in order to reach the desired goals? The minimal set of states and control actions needed indicate that a simpler and reduced model of a bipedal robot can be used to control the balance and locomotion of a walking robot. Our primary approach is based on viable and controllable regions. The N-step viable region is the set of all states from where a robot can take at least N steps and not fall down. The N-step controllable region is the set of all states from where a robot can reach the desired goal (e.g., a given walking speed and step-length) in at most N steps. The similarity in sizes between these regions, for a full-order versus a reduced-order controller, are measures of the efficacy of the reduced controller. The compass-gait walking model, actuated by a hip motor and an impulsive push-off, is used as a testbed for developing and testing the controller-reduction principles. We show that a controller that commands only step-length and push-off, controls the robot almost as well as the most general controller that can swing the leg in arbitrary ways. In this reduced controller, the step-length and push-off are decided based on a single state variable, just after the heel-strike. This reduced controller covers a large fraction of the full controller's viable and controllable regions. The success of this reduced controller suggests that a point-mass model with foot placement (i.e., step-length) and push-off can be used by high-level walking controllers. Other separate projects described in this dissertation are 1) state estimation for the bipedal robot 'Cornell Ranger', 2) controllability analysis of a bicycle in zero gravity, 3) design of chains that can fall faster than gravity, and 4) notes on optimal stabilizing controllers for optimal trajectories.