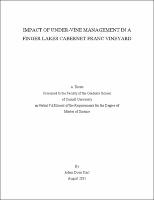 Four under-vine management treatments were established in a Cabernet Franc vineyard to study their impact on vine growth and wine quality: glyphosate herbicide (GLY), cultivation (CULT), native vegetation (NV), and white clover (WC). Drainage lysimeters were installed in the under-vine treatments to monitor nutrient and pesticide concentrations in leachate. Smaller vine size and yields of NV cover crop in comparison to GLY vines suggested the potential for cover crops to limit vine vigor, whereas the greater yields of GLY vines, similarity in juice chemistry between treatments and the lack of sensory differences between treatments suggested that herbicide use promoted higher yields without a sacrifice in fruit quality. GLY leachate had greater concentrations of dissolved organic carbon, total nitrogen, and imidacloprid insecticide than NV leachate. These factors demonstrate the potential of cover crops to maintain soil quality and decrease the leaching of nutrients and agrochemicals in comparison to conventional practices.